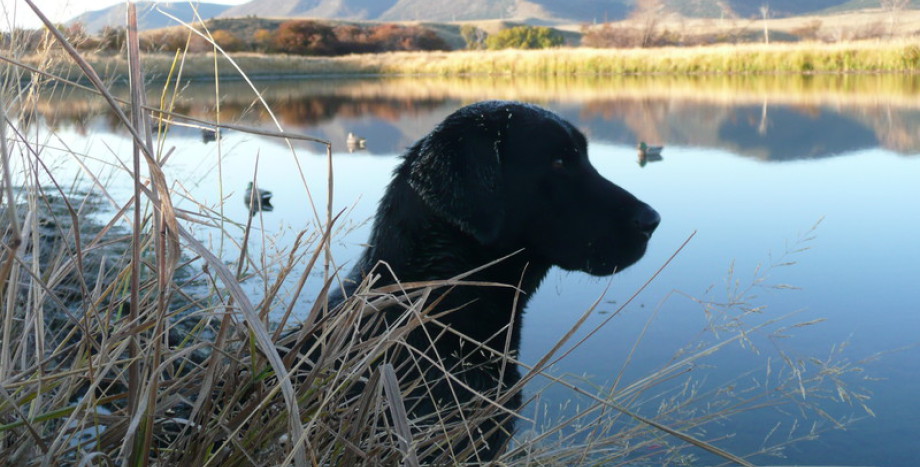 BEN IS AND ALWAYS WILL BE THE REASON THERE IS A BLACK WATER CREEK RETRIEVERS.

A letter from Mike-
"We spent many mornings watching the sun come up and many afternoons watching it set. We spent many, many days in the field learning from each other. I was the trainer yet you were my teacher and I was your student. You never spoke but I always heard you. You taught me so much about life and you never said a word. You taught me how to train dogs and help me develop the skills I have. Together you and I built BWCR. Your legacy will live on through all of the blessings you and I have put in homes and in the field all across this country. I am forever grateful for the 12 years I was blessed to call you my dog. I held you when you took your first breath and I held you when you took your last."

Ben was an intelligent, handsome mid/large framed Lab.  He normally weighs around 70 pounds.  He was very athletic for a dog his size.  He was a tremendous marker and had an incredible ability and talent to find birds even when he didn't see them fall. He was as serious about retrieving and training as Mike is. He was so well behaved around strangers and kids. He was calm and quiet in the kennel, in the duck blind and in the training field. None the less he was a retrieving machine when the birds and bumpers come out.  Ben was ready to run his AKC Junior Test at 6 months old, but due to work I couldnt run him until he was a year old.  He received his AKC Junior Hunter (JH) Title with 4 straight passes.  We continued training for his Senior Title.  We were what I would consider Senior Title Test ready and I took a transfer with my company and moved to Colorado in 2007.  During the 3 years while in Colorado Ben was just a hunter.  We harldy ever trained except for fun.  When we returned to Texas in 2010 I decided to get back into hunt tests and see how Ben would do.  Ben was 5 years old and I went back to training him hard every day and pushing him prepairing him for hunt tests.  He had a great attitude as usual and continued to excel.  That was in November of 2010.  That spring we entered his first Senior Hunt Test at Rose Country HRC.  He passed both tests that weekend.  Ben received his AKC Senior Hunter (SH) Title with 4 straight passes.  ﻿He then received his Hunting Retriever Title (HR) with four Finished passes in a row.  Then he received his (HRCH) Hunting Retriever Champion Title with 4 more finished passes in a row.  Ben was an exceptional dog and we are very proud of him and what he has accomplished over the years. ﻿﻿

Ben has sired lots of litters and produced some really pretty, hard working and productive pups.  Ben is Tri Factored and has produced Yellow, Chocolate and Black pups.  Ben has produced MANY puppies that have went on to get various AKC and UKC Hunting Titles and every puppy he has sired is hunting. 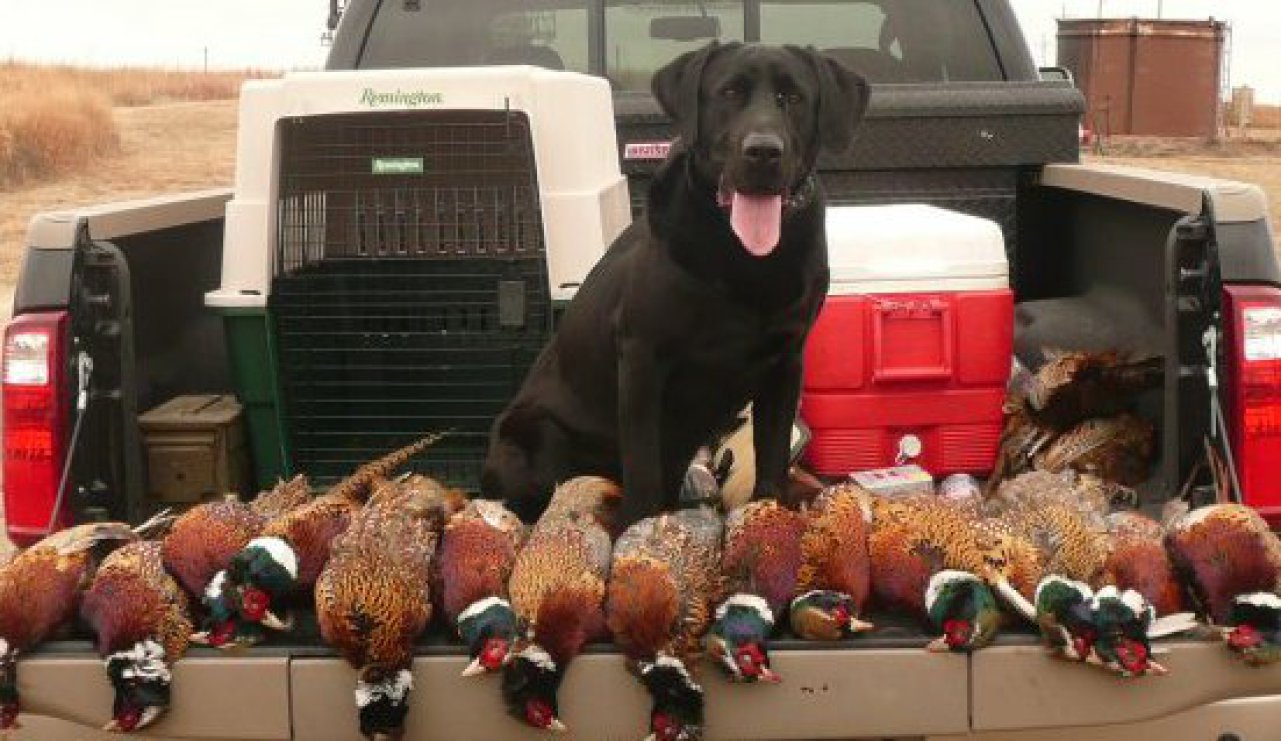 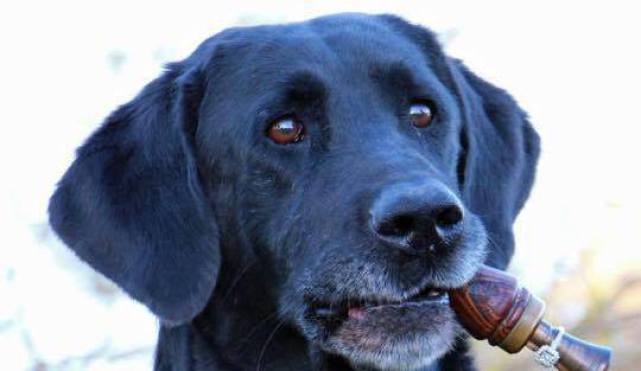 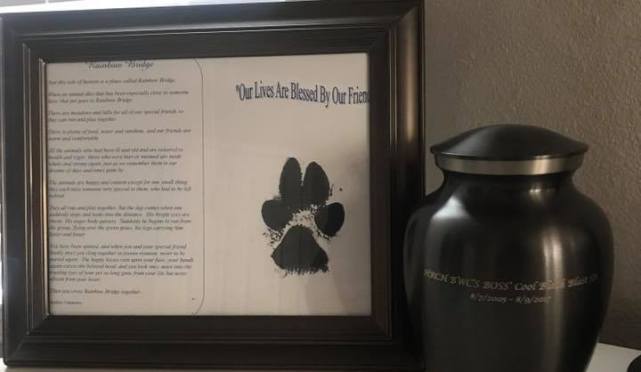 Spook is a son of HRCH BWC'S Boss Cool Black Blast SH & HRCH BWC'S Tic Tac Teaux SH and  one of our upcoming males.  He is CHOCOLATE FACTORED.  He is a very well mannered dog that is very trainable with a calm temperament when not working with lots of drive and style in the field.  Hei is medium sized dog weighing about 65 pounds.  Spook will be earning his Seasoned  and Junior Titles Spring 2017.  We are excited to see what the future holds for Spook. 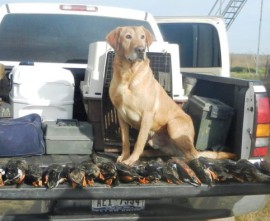 Trigger is a really cool dog.  He is a big boned dog that weighs in around 80 pounds.  He is a go getter and has a great personality, calm at home and business in the field.  He has lots of style, speed, agility, drive and heart and is a phenomenal marking dog.   He is a fast learner who strives to please and is a blast to train because of his enthusiasm to retrieve and train, most of the time I think he is making me better.  Trigger is preparing to run in the hunt test world now and will be a Finished/Master Titled dog soon.  TRIGGER IS HAPPPILY RETIRED AND SPENDS HIS DAYS LAYING AROUND  THE YARD AND HIS FALL IN THE DUCK BLIND.

There are also many other high lighted FC/AFC dogs on his pedigree. 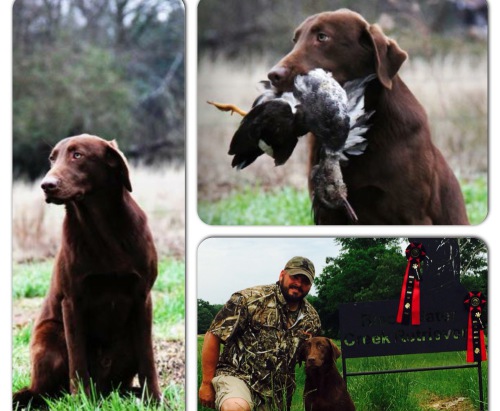 Thor is a son of 1996 NFC Storm's Riptide Star and one of our upcoming males.  He is a very well mannered dog that is very trainable with a calm soft nature with lots of drive and style.  Hes is larger dog weighing about 75 pounds.  We are excited to see what the future holds for Thor. 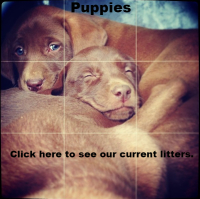 We proudly use and recommend the following products and services. ﻿